Actuaries in the Arts: Sam Broverman 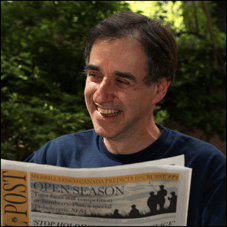 Sam Broverman has been a Professor of Actuarial Mathematics since 1978, first at The University of Texas at Austin until 1980, and since then at the University of Toronto. Professor Broverman is an ACTEX author who has written numerous textbooks and study guides widely used by students preparing for actuarial examinations.

Tell us about how you decided to become an Actuary.
I have an older brother who was studying actuarial science while I was in a math program, he encouraged me to take a few exams. When I completed my PhD in Theoretical Math, the best opportunities for university faculty positions were in actuarial science, so I went in that direction academically in 1978.

What is your favorite part about being an actuary?
A large part of my career has been devoted to actuarial education. I find it very rewarding to see students graduate and continue on to successful careers as actuaries.

Do you have any advice for young people interested in pursuing this career?
For a long time, the actuarial profession was an ideal choice for someone with good technical and mathematical skills who wanted to pursue a business related career path. In the past 20 or so years, the finance and investment world has begun to provide an alternative career path for those people, and more recently there has been an explosion in the applications of data science and statistical modeling which has provided more alternative career paths for technically strong students.

I think the actuarial profession continues to be a good choice for a career in a long standing and stable industry – the insurance industry. The professional actuarial bodies like the Society of Actuaries and Casualty Actuarial Society are always adapting to the changing financial world. Actuarial training has increasingly involved topics in math, finance, statistical modeling and predictive analytics. In the always changing financial environment an actuarial career will include understanding and application in these evolving fields.

Someone with professional actuarial credentials has open to them a wide range of opportunities in the financial world that go beyond traditional insurance. I think this continues to make the actuarial profession an attractive option for those with good technical skills.

Now, switching gears, tell us about how you became interested in music and singing, and how you got started? How long have you been singing?
I have been involved with music and singing since I was a child. I was always involved in music at school, including choirs, musical theater and other musical ensembles including rock and roll bands when I was in my teens. I have worked professionally as a singer since I was 18 and have appeared in musical theatre, on television and with bands and orchestras. I was able to fund a large part of the cost of graduate studies in mathematics from the income I earned as a singer.

Tell us about a few places you performed, and which was your favorite place?
I have performed as a solo singer in many venues in Toronto, where I live, as well as performing in a variety of other cities including Vancouver, Winnipeg, Hong Kong and New York. I was quite excited to perform a cabaret show at the Metropolitan Room in New York a number of years ago. I was a member of a vocal group on a CBC (Canadian Broadcasting Corp) nationally televised show for a few years while I was a graduate student.

I have been a member of a choir in Toronto for many years. The choir performs with the Toronto Symphony Orchestra. A couple of years ago the choir received a Grammy nomination for a recording of Handel’s oratorio “The Messiah” (“Hallelujah” for those who know that chorus) and the choir won a Juno award (Canada’s equivalent of a Grammy) this past year for a recording of an opera.

What are your top influences, musically?
My mother was a piano teacher and my dad was a good singer, and there was always music of all kinds in my house – opera, classical, jazz, rock, folk, etc. When I was very young (in the 1950s) I was a huge fan of Elvis Presley. I bought (with the help of my parents) an album of his “golden hits” when I was seven years old. As an adolescent and teen I became a huge fan of blues and rhythm & blues music, and I still am.

In my university years I began taking classical singing lessons, which I did for almost ten years. I developed a love for classical songs and opera, and at the same time I developed a love for jazz and the American Songbook – the collection of songs popular from the 1920s through the 1970s. Tony Bennett (just turned 95 and still performing) and Frank Sinatra are my main jazz singing influences.

Are you still singing and performing?
I was performing in Toronto clubs and bars regularly, and occasionally elsewhere in Canada, until the shutdown due to the pandemic. I have been starting to get singing gigs again as things are opening up.

Do you ever get a chance to apply your actuarial/mathematical skill in your music?

I like to try my hand at songwriting and writing parody lyrics to existing songs. I have performed at several actuarial research conferences, including the ARC a few times and the IME (Insurance, Mathematics and Economics annual conference).

A few years ago I recorded an album of eight actuarial and math related songs, mostly parodies, but some original.

What advice would you have for career-focused actuaries, who are interested in spending more time pursuing hobbies outside of work?
The initial stages of pursuing an actuarial career can be challenging and demanding. There are the professional exams which must be completed. This competes with work and, perhaps, family obligations. It is always possible and, I would suggest, necessary to find time to follow interests outside of work, whether they are athletic, artistic or anything else.

From my own perspective, it would never be possible for me to give up involvement in music. There were periods in my academic career when I had very limited time for that involvement, but I always found some time and as the demands of my career eased a little I was able to find more time. With careful consideration I think it is possible to find the right balance between career and the rest of one’s life.

Discover more of Sam's music on his webpage at https://www.brovermusic.com/

Actuaries in the Arts: Victoria Grossack
In " career, Actuarial Career, Actuary, interview, Notable Actuaries "
Getting to Know Brian Fannin, Author of R for Actuaries and Data Scientists
In " interview, Product Updates, rforactuaries "
Actuaries Around the World: Ireland
In " Actuaries Around the World, international, interview "
August 23, 2021
Previous Ten Pearls of Wisdom for Navigating the Changes to the SOA's Associate Level Exams
Next SOA Update - The Prometric Center Experience for FSA Written-Answer Exams